Kerry Balenthrian, author of The 17.6 Year Stock Market Cycle: Connecting the Panics of 1929, 1987, 2000 and 2007 joined the hosts of CNBC Squawk Box to discuss the ongoing battle between bulls and bears. 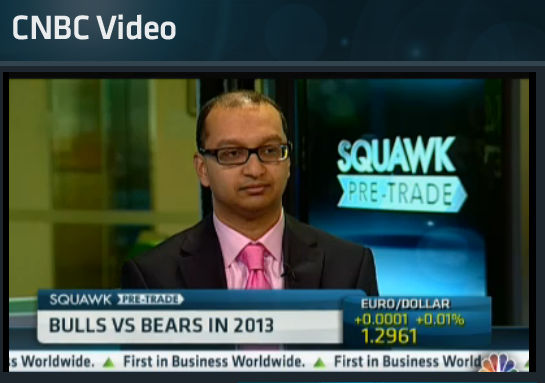 Kerry Balenthiran, author of The 17.6 Years Stock Market Cycle: Connecting the Panics of 1929, 1987, 2000 and 2007 talks to Dominic Picarda about the Balenthiran Cycle which forecasts that; the ongoing secular stocks bear market will last until 2018, the cyclical stocks bull market will end in 2013 and the gold bull market will peak in 2015. 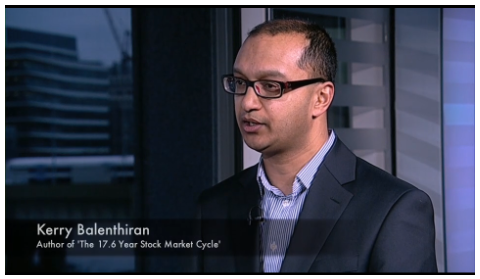 By: The Editor, Investors Chronicle


During the stuttering post-credit crunch recovery, IC writers were temporarily banned from using what was becoming an increasingly hackneyed financial descriptor: 'double dip recession'. Yet here we are, just a few short years later, talking not of a double dip but the impending threat of a 'triple dip' recession. Less 'Sorrell's bath' than 'Osborne's infinity pool' (constantly tipping over the edge), there just does not seem to be any end in sight to the UK's economic malaise.
This year's Budget, announced next week, will reveal if the Chancellor has any new tricks up his sleeve to get the UK firing again. Few are hopeful. With his unwavering dedication to austerity, Mr Osborne's current economic policy has the same scratched-record feel to it as predecessor Gordon Brown's oft-repeated claim that he had abolished boom and bust.

At least, unlike Mr Brown, Osborne's turn in the Chancellor's hotseat has an air of realism about it. The UK should live within its economic means, even if now may not be the time to single-mindedly pursue such goals. And however much he is cajoled, there are no simple solutions, especially as, one by one, the low-hanging common-sense policies are picked off. The implementation of a successful tax regime for North Sea oil & gas industry is one of them, and as we discuss in this week's sector focus, that's opened up a new wave of opportunity for investors in this economically crucial industry.

Brown was, to misuse an analogy, more Canute-like in his view of the economy, believing he could turn back the economic tide even as, eventually, the waves of the credit crisis lapped around his feet. Ultimately, though, while economic cycles can be distorted, in the end they cannot be beaten - they are as close to a force of nature as you get in the world of business and finance.

A month into this year's reporting season, and it seems that something akin to cyclicality is starting to take its toll, too - companies have, in the main, been performing well, but earnings outlooks are becoming more muted and the capital investment that could spur further growth remains stuck in the mud. That isn't reflected in punchy valuations and could spell trouble as the market wakes up to the realisation that a powerful earnings upswing could be running out of steam.

That sets the scene for a nasty market fall in the months ahead. Believe it or not, we are still in a long term bear market that will last until 2018, exactly 17.6 years since it began, according to cycles expert Kerry Balenthiran. Markets may now be making new highs, but they will soon be followed by some nasty falls before a new mega bull run, much like the 80s boom, begins. That's a cyclical turning point, as Mr Balenthiran argues in this week's cover feature, which shouldn't be ignored.


A long term bear market is around the corner and will last until 2018, with the Dow losing up to 30 percent of its current value, Kerry Balenthiran, author of "The 17.6 Years Stock Market Cycle", told CNBC.

"My research identified long term 17.6 year secular bull and bear markets. We're in a long term bear market. [But] there is a flip-side which is the commodities cycle. When they decline you get a strong bull market in stocks because input stocks go down. But this bear market will continue until 2018 with the Dow at around 10,000," Balenthiran said.

He added that the rally currently taking place would continue for at least the next three months, but said stocks would start falling in October to November.

The idea of market cycles is not new and alternative cycle theories abound, ranging from forecasts on the number of years for a bull/bear market to the more offbeat including the use of lunar cycles to predict the most profitable times for stock market investment.

Balenthiran's predictions jar with the recent rally which has seen markets around the world post new highs– the Dow Jones Industrial Average posted its first nine-day winning streak since 1996 Wednesday closing up at 1,4455.28 and the S&P 500 was also within striking distance of its all-time closing high on Wednesday at 1,554.52.

Balenthiran looks back over the last 100 years and also identifies mini-cycles within the longer-term ones.

He said the low in 2018 would also be a "great opportunity" to buy stocks in anticipation of the longer term move upwards.

However, this bearish view is not shared by all within the financial markets. Swiss bank Sarasin's chief strategist expects the S&P to break through the 2,000 barrier by 2015 and a Goldman Sachs note earlier this week said London's blue-chip FTSE100 index would continue to rise to 7,200 within 12 months.

In earlier trading the FTSE 100 hovered around the 6,500,mark maintaining the momentum which has seen it soar by 10 percent so far this year.

Balenthiran said the break in 2018 would likely be triggered by the commodities sector.

"I'm expecting a peak in gold and commodities in 2015 but when that bubble bursts we get the low in 2015. Then there is a bounce and then a sustained uptrend once input costs go down year-on-year and consumers have more money in their pockets," he said.

Balenthiran admitted that factors such as inflation and central bank intervention through monetary policy easing can distort the cycle and skew final predictions. "I use the cycle to predict things going forward and I have high conviction in that and time will tell," saying he couldn't guarantee any particular outcome "for sure."
Email ThisBlogThis!Share to TwitterShare to FacebookShare to Pinterest
Home
Subscribe to: Posts (Atom)