The 17.6 Year Stock Market Cycle on The Big Picture Blog 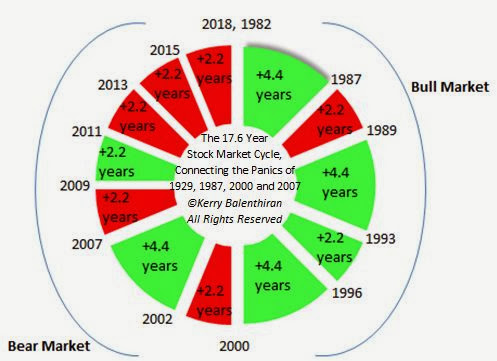 I wrote the following in response to some of the comments to provide some additional explaination behind the cycle.

The full cycle from top to top is 2 x 17.6 years, but each half has its own distinct pattern. There is already some recognition of a 17.6 year stock market cycle, notably by Art Cashin, so it made sense to refer to it as a 17.6 year cycle.

The 2.2 year and 4.4 year increments refer to bullish and bearish phases and not specific turn dates. Therefore while the 2007 to 2009 top to bottom was shorter than 2.2 years, the cycle shows a top in 2007 and bottom in 2009 based on this historic pattern going back 100 years for the DJIA.

The period 2011 to 2013 is indeed shown as a bearish period. These bearish periods can either result in a significant sell off or overall sideways movement. I completed the research on my cycle in early 2011 and calling for a 2011 high turning point was the first forecast that I made using my cycle.
When I completed the manuscript for my book prior to it being published I kept the original forecast as that is the best forecast based on 100 years of history. I am well aware that the bullish periods are 4.4 years and this has worked out well in the period 2009 to 2013. However based on my study of the 1970s and 1940s I stated in my book, published in March 2013, that this period would see a significant buying opportunity that would be the last major low of the secular bear market and offer a great place to buy in order to ride the next great bull market in stocks. The August 2011 low may be the low of this period, as I specifically say in my book that the low sometimes occurs at the beginning of the period, or the low could be ahead of us. But I do think, based on my research, the nominal low for this 17.6 year bear market was reached in 2009 and we are not headed for those levels again.
I remain alert for a significant correction ahead as the US/UK markets have become historically overvalued (using CAPE) and exuberance and leverage abound based on QE addiction. Sustainable secular bull markets are not built on emergency central bank policies, stagnant wages, stubbornly high unemployment (specifically youth unemployment) and artificially low interest rates. Don’t get me wrong, I understand the need for central bank intervention, I just don’t think this is a healthy bull market in stocks.

Whilst completing my book I came across an article from 1999 by Warren Buffet in Fortune magazine, Buffett talks about his expectations from stocks over the next 17 years and discusses past performance for other 17 year periods such as 1981 to 1999 and 1965 to 1981. Buffett stated that he expected a 4% annual real return, at best, until 2017. Why does Buffett specifically mention 17 years, why not 15 year or 19 years? Also Buffett rarely mentions his outlook for the future; I believe he was ringing the bell at the top.

Back in 1966 Buffet closed his partnership to new money in 1966 as he grew concerned about elevated stock prices and he liquidated it completely in 1969 because he felt that he was unable to find any bargains in the market. I’d argue that Buffett is a market timer as well as a value investor.

I know this sounds crazy to people who are unfamiliar with cycles, and cycles are not to be used in isolation either, but I started on this journey when I was reading Hot Commodities by Jim Rogers. Rogers mentions the commodity cycle of 17/18 years that goes back hundreds of years. He sites the excellent research of Barry Bannister from 2002 where Bannister argues that we are in a new secular commodities bull market that will end in 2015, driven by long term underinvestment and supply issues.

I have obviously used the cycle to try and paint a picture of what the future may look like and there are other audacious claims in my book such as the gold/commodity markets will peak in 2015 and we are just in a final cyclical bear market within the long term commodities bull market. Also I think that the next secular bull market in stocks will take us to Dow 100,000 in 2035 before we see another 17.6 year bear market, driven by a new 17.6 year commodities bull.

We have made new nominal highs in most stock markets but the real return after inflation is still negative, excluding dividends. I am expecting the end of the secular bear market in stocks, in real terms, to be 2018 and I anticipate a return of inflation to get us there and finally force the Fed’s hand on QE.
on November 02, 2013
Email ThisBlogThis!Share to TwitterShare to FacebookShare to Pinterest
Newer Post Older Post Home