"The four most dangerous words in investing are: 'this time it's different.'" Sir John Templeton.

Readers of my book and articles will know that I track the secular 17.6 year stock market cycle and in particular the specific 2.2/4.4 year cyclical turning points.  Awareness of this long term Balenthiran Cycle is essential for understanding where markets are headed and being positioned accordingly.

The Balenthiran Cycle diagram, below, shows the secular bull market cycle from 1982 to 2000 and the secular bear market from 2000 to 2018.  By studying price data from the Dow Jones Industrial Average going back 100 years, I have demonstrated that this cycle works from 1929 to 1947, 1947 to 1965 and 1965 to 1982. I have then been able to extrapolate the cycle forwards to provide a market roadmap stretching out to 2053, which outlines the changing character of the stock market through the different phases of the 17.6 year stock market cycle. 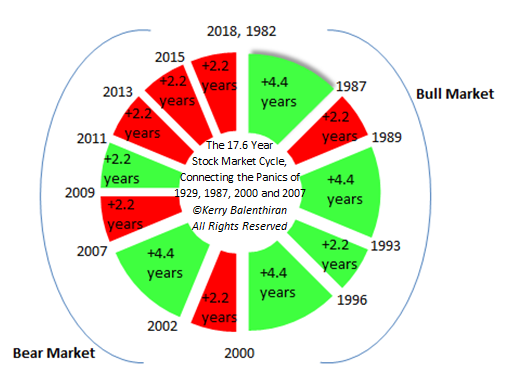 The Balenthiran Cycle forecasts that the current secular bear market won’t end until 2018. However when I was a guest on CNBC, as well as in comments to my articles, the response that I keep hearing is that a new secular bull market has already begun, central bankers have won. QE has triumphed over a cycle that has survived the Great Depression, two world wars and both the US and UK abandoning the gold standard. Basically “this time it’s different!”

However this time is not different and as well as the 17.6 year stock market cycle forecasting a significant low in 2013, another shorter term cycle is as well.

In order to trade effectively, it is useful to monitor shorter timeframe cycles in addition to longer term cycles.  One in particular is very informative, the 17.6 week cycle, and it is flashing red right now!

As can be seen from the chart above, the third harmonic of the 17.6 week cycle has coincided almost exactly with interim highs during the cyclical bull market. The dates given by the cycle are shown in the following table, along with the actual market highs: 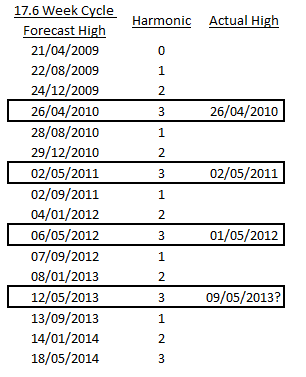 The chart above also shows that a typical correction following a high is completed during the next 17.6 week cycle, which put us at 13th September 2013, one day before St. Leger Day!

Sell in May? The famous saying began in Britain as "Sell in May and go away, stay away till St. Leger Day." St. Leger Day is the final horse race of the British equivalent of the Triple Crown.